In January 2013, I hopped on a plane in Boston Logan airport for a destination 5,000 miles away from home. At 23, it was my first time flying.

My friend Jon and his then-girlfriend Brooke had gone out to Hawaii in 2012 to work and live on a farm on the island of Oahu through the World Wide Opportunities on Organic Farms (WWOOF). A bakery and vegetable stand – among other things – the farm is located in the most remote town not only of Oahu, but in all of Hawaii: Hana (hence the farm’s apt name, Hana Farms.) It’s also located right off the famous Hana Highway, a 64-mile stretch of road that meanders along nearly the entire east coast of the Hawaii.

After a few months of being on the farm, Jon and Brooke were able to secure their own private space just down the road through one of the locals. The space? A primitive cabin with no hot water or electricity, situated in a lush jungle rife with banana and avocado trees…and lots of creepy-crawlies like “cane spiders” with a leg span the size of Shaquille O’Neil’s hand.

The cabin had two spaces: the “living room” – which was essentially just Jon and Brooke’s room sans any furniture aside from their bed – and the small kitchen. To accommodate my stay, they set up a tent in the corner of the “living room,” just feet from their bed, complete with a sleeping bag. It was here that I slept for my entire stay, and as someone who considers himself a minimalist who can quickly adapt to myriad sleeping environments, I was completely okay with it. 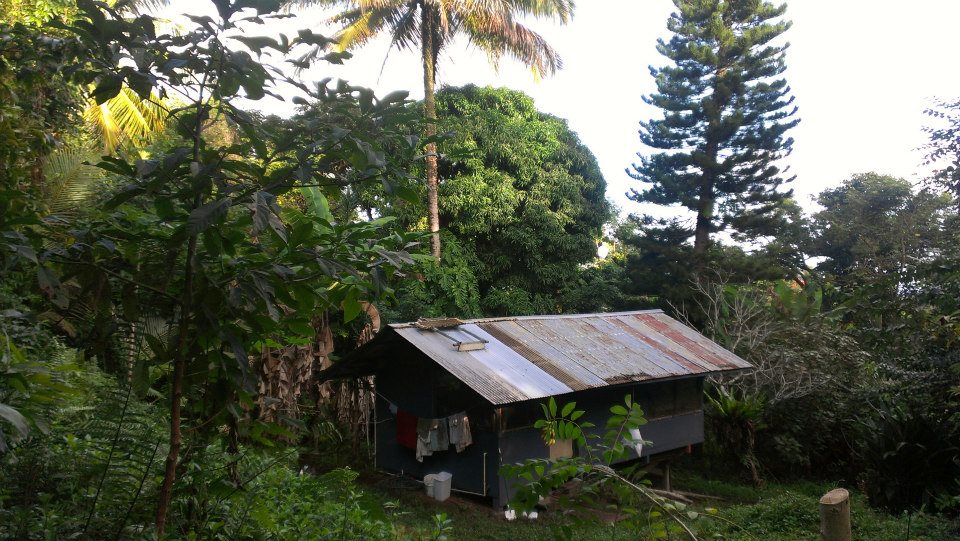 The cabin Jon, Brooke and I stayed in

It was January, so escaping the oppressive winter conditions of Maine to a dazzlingly beautiful, lush environment was spellbinding. Growing up with parents who seemed to have very little interest in adventure or travel – not to mention very little money – I had really never left New England. Consequently, one can imagine the profound and transformative experience this was for me.

I had almost no money to my name, and also no return ticket. I ended up staying for nearly three months.

Being there for that amount of time enabled me to get to know many of the locals, as well as other “mainlanders” – or “Haoles” (pronounced “how-lees”) in Hawaiian nomenclature – who were traveling there. The trip also offered my first-ever national park experience at Haleakala National Park, a “shield” volcano with a few cabins and plenty of hiking opportunities. I ended up visiting twice, and both times were truly profound as it felt I had abandoned Maine and landed on a different planet.

Other experiences in Hawaii created lasting memories, one in the form of a scar.

I had brought my longboard out there, and one day I decided to take my board all the way to what’s called the “Pīpīwai Trail” – which I thought was the famed “Bamboo Forest,” but turns out just had a lot of wood bridges and bamboo! The trail is located about 14 miles from where I stayed with Jon and Brooke, so I woke up at sunrise, had breakfast, and embarked on my Great Longboard Journey. 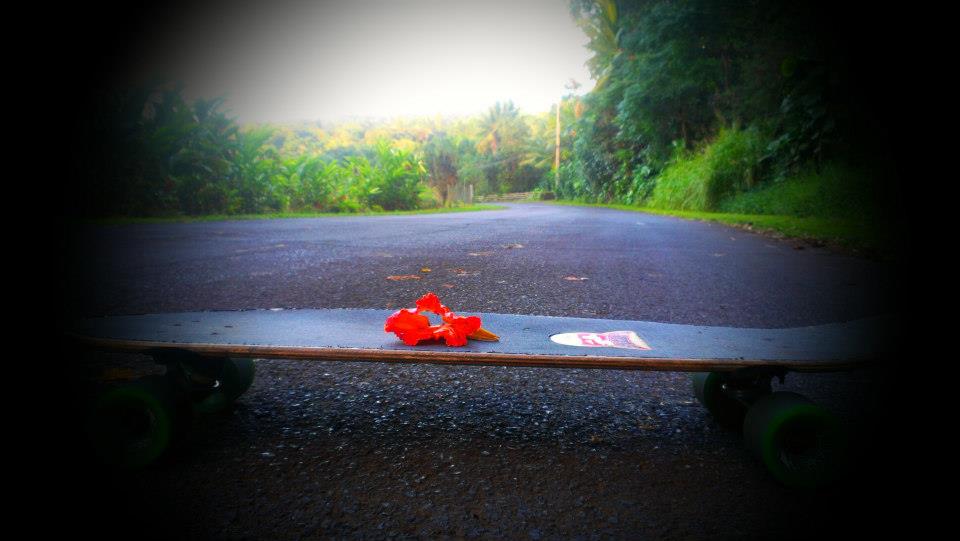 The longboard used in my accident. I took this at the top of our road with my old Samsung HTC One smartphone.

I pushed and pushed my way down the Hana Highway, stopping every now and then to take in the scenery while I jammed to whatever I was listening to on my iPod at the time – very likely either Belgian drum-and-bass artist Netsky, or John Mayer. Both of those artists essentially created the soundtrack to my trip, so anytime I listen to their albums “2” or “Continuum” (respectively), the music harkens back to the good days in the Aloha State. I’ll forever remember Netsky’s “The Whistle Song” as the song I listened to while the plane ascended on my first-ever flight, the palms of my hands sweating as I looked out the window as we climbed higher and higher in elevation.

Because the weather is so unpredictable in Hawaii, it began to rain on a section of my route as I was about 10 miles in or so, though not a downpour by any means – a fairly light and even refreshing rain. Consequently, as I crested a fairly steep hill, the road was a bit slick. Like a true imbecile, I didn’t consider how this would affect my ability to slow myself.

I began descending down the hill, and I gathered more and more speed. After a few seconds, when I saw a car coming from the opposite direction and I felt I was getting too much speed, I put my right foot down to “foot brake.” However, the slickness of the road disabled my ability to gain any traction. What resulted was me getting “speed wobbles” as I continued rolling at a high velocity. Consequently, I lost all control and Superman-dove straight onto the tarmac, landing flat on my chest like a pancake.

Jon (left) and me skateboarding at a park off the Hana Highway. He clearly had some spills of his own!

The collision and subsequent pain were not just jarring but were exacerbated by the fact that I wasn’t wearing a shirt. Examining myself, I saw that my chest and left arm were immediately bloodied up. The wound on my left arm was very, very strange: it was about a half-inch wide gash located just past the crook of my elbow, on the inside corner of my forearm. Thankfully, no severe injuries were sustained, such as broken bones, ribs, or even broken skull. It was all cosmetic. But psychologically, I was very rattled in that moment. I can’t remember whether the person driving the car stopped to ask me if I was okay.

Since I was so far from “home” and covered in blood, I saw a large house nearby – the only house in the immediate vicinity – and decided I’d go and ask for help.

I knocked on the door and someone – a middle-aged woman – came to it soon thereafter. The situation must have looked absurd, shocking, and bemusing for her. Here I was, a total stranger, shirtless and covered in blood, knocking on her door. However, she was sympathetic to my obvious plight and took me in. Another woman about her age was there, and she also seemed sympathetic.

They allowed me to wash myself up with a shower in their backyard. This, quite comically, ended up being a special moment for me: it was my first warm shower in more than a month.

It was enhanced by the serenity of showering outdoors, with a view of the Pacific Ocean right in front of me.

After I was finished, I went back into the house and the women subsequently wrapped me with a bandage and applied some kind of healing ointment. They even gave me a little extra to bring home with me. I was and still am supremely thankful for their affection, generosity, and care. My sincerest “mahalo” (thank you) to these two altruists!

I didn’t let the injury stop me, so wrapped with bandages, I continued on to Pīpīwai. 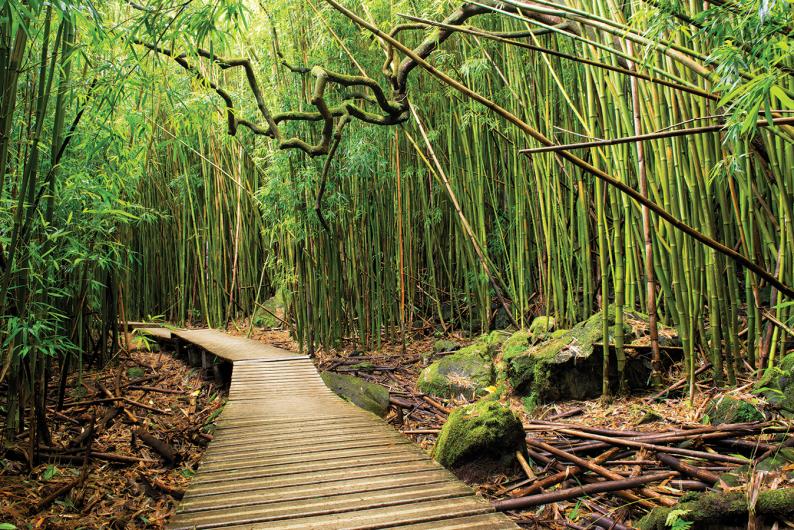 As I rolled on, I noticed the blood seeping through my bandage on my arm, but it didn’t appear like any sort of critical loss that called for medical attention. Ignoring the injury, I eventually landed at my destination and explored the magnificence and glory of the forest. I spent a couple hours here, and the journey ended up being totally worth it. Growing up in Maine probably heightened how surreal and striking it all was, even though Maine has boundless natural treasures of its own. Bamboo was everywhere, and the waterfalls were absolutely majestic!

Eventually, however, I did become more concerned for my injury, so out of prudence I stopped by a health clinic called Hana Health.

The doctor removed the bandage and examined it. The gash was unusual and had some depth to it; it was like a tiny crater in my arm. In addition, it also had what appeared to be tiny pebbles in it from the pavement. It was pretty gnarly-looking. But upon examination and treatment, the doctor concluded I didn’t need stitches, thankfully. She wrapped it back up and sent me on my way, and the wound eventually healed. It was amazing I didn’t require not just stitches, but a skin graft! 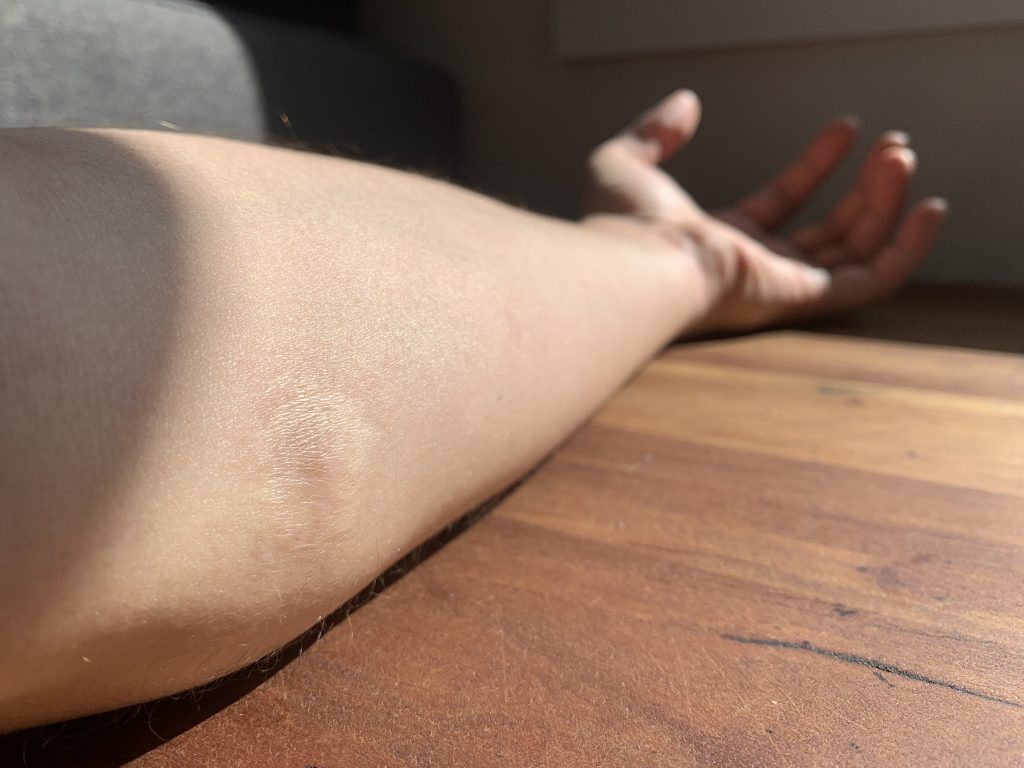 With a new bandage, I kept longboarding my way home, probably much to the doctor’s opposition (and eye-roll). It later made for a great story for Jon, Brooke, and some of our friends in the area. 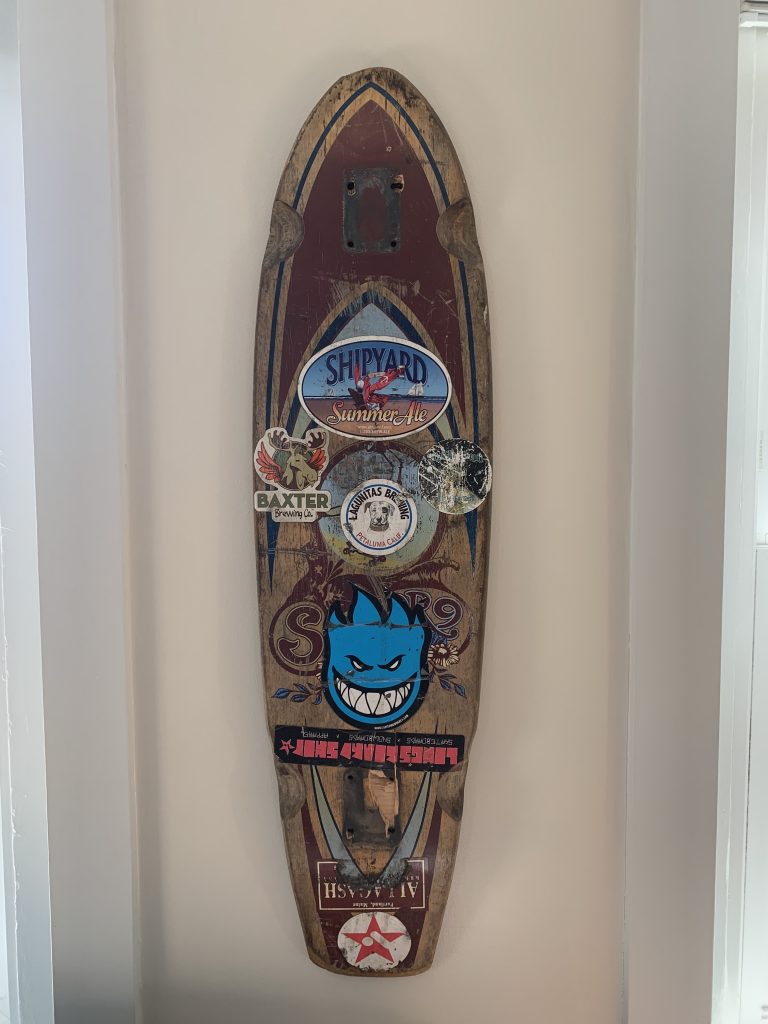 The longboard is now mounted on my wall, eight years later

While scathed, I was thankful to not be in any dire health condition. However, in the days afterwards, I recall longboarding and experiencing some form of trauma – the memories of my fall actually really disturbed me. I still felt a bit psychologically and emotionally haunted by it because of how severe the collision was, replaying it over and over again in my mind. While it wasn’t full-blown PTSD, it held a semblance of trauma.

I quickly surmounted this, however, and almost 10 years later, I’m still longboarding.

Thanks for reading! Have you ever experienced a fall like this? Any sort of gnarly crash or collision that forever lives in your memory? Do you have any badass scars? (Ones that are probably infinitely more badass than mine!) Any questions that come to mind? Comment below!