First Portraits With an Off-Camera Flash

Even though I’ve been doing photography for a few years now, I’d never invested in an off-camera flash until recently.

In fact, I never even knew what they were until I took a photojournalism class at the University of Southern Maine in 2019.

My instructor, Fred Field, hired me at the end of that semester to shoot the Bowdoin College Alumni Reunion with him, and it was at this job site that I saw Fred using a few of these flashes: one that was technically attached to the camera, but handheld; another that was attached to a stand and could be adjusted by height, used chiefly on one person or a small group of people; and yet another that resembled a satellite of sorts that I saw him suspend in the corner of a large banquet hall to fill the room with light. It sort of blew my mind seeing him light people with no flash attached directly to the top of the camera, as many people (including myself) are accustomed to seeing. And it was seeing him do this that explained how his subjects were lit in a lot of his photos he showed us over the semester.

At the beginning of April, I bought myself a Godox AD200 pocket flash. It’s shaped like a rectangle and attaches directly to a light stand. Its portability enables the user to easily set up and light people on the go, so I was excited to put it to use for this first-ever experience of mine. It suddenly felt like there were a ton of possibilities to get creative and light people where light is otherwise scant. 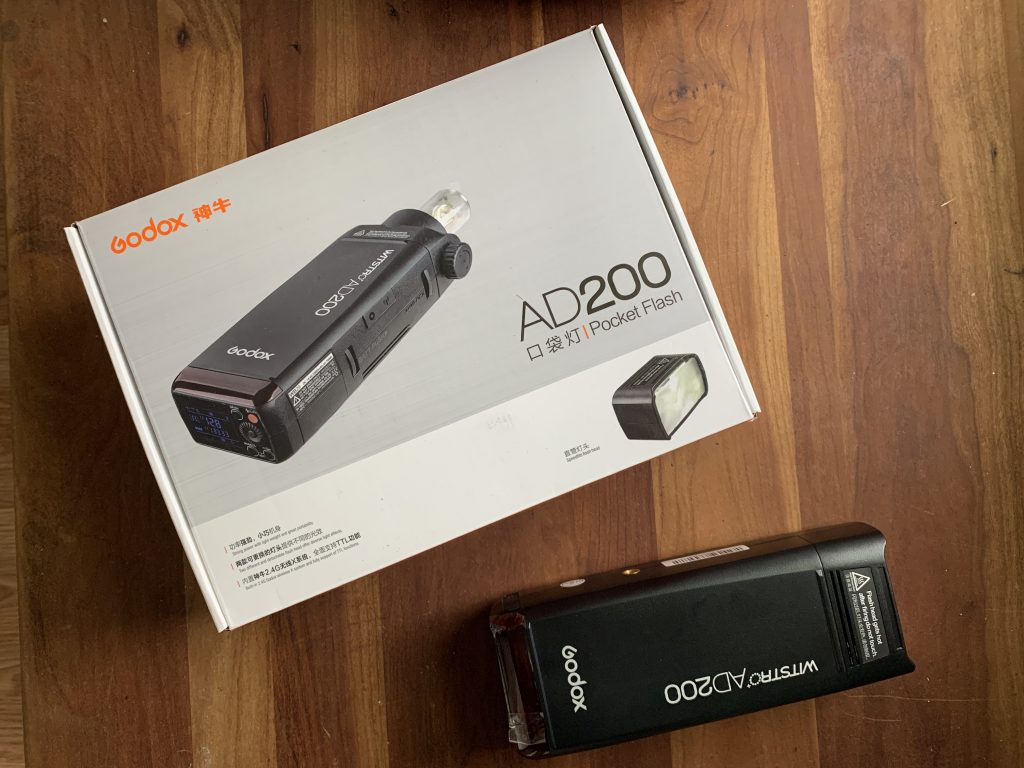 I’ve had a planned studio shoot with another friend of mine, Caroline, during which I planned to use the flash for the key light, but I knew I couldn’t just show up to the studio without knowing what the heck I’m doing. So I needed to practice a bit first to get the hang of this new piece of equipment of mine, despite having had some practice with the same flash a few months before in my friend Taylor’s studio. Taylor is a wedding photographer who had a studio in Saco, Maine for a while, and she let me use her studio and flash for some product photography shoots I did.

So two weeks ago, my friend Angie volunteered to model for me so I could practice using it.

Angie and I met up in Portland’s Old Port at around 6pm and I had a couple spots in mind. The first one was right on the city’s enchanting waterfront, in between Custom House Wharf and Portland Pier. The famed J’s Oyster Bar and Harbor Fish Market are situated on either side, and Luke’s Lobster sits at the end of Portland Pier. When we first arrived, there was a homeless man lying by the adjacent wall of Solo Italiano who started shouting at us, as well as a couple other vagabonds, so feeling apprehensive, we had to relocate. We went around the corner to a spot nearby that was just as good, if not better, with the same settings. 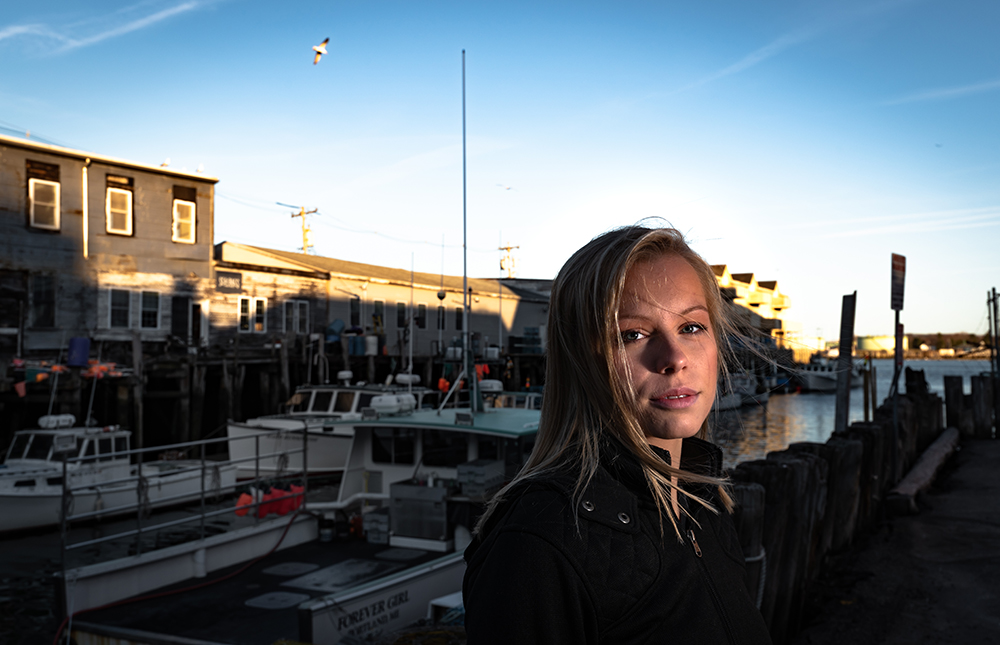 Even though I’d been here so many times after living in Portland for six years, I fell in love with this spot immediately. I’d never done a shoot here before, so it actually felt new. The setting was quintessential Maine: there were boats, lobster traps, seagulls, and of course the Atlantic ocean waters of Casco Bay.

Angie could tell you that when I popped off my first shot and looked at the photo in my camera, I was elated like a young 1998 Bulls fan who just got high-fived from Michael Jordan. Or a 13-year-old Garrick who just got slapped in the face by Bam Margera. (If you know, you know.)

We continued taking a bunch of photos here, and I was obsessed. It truly did feel like entering a new world of possibilities. I was absolutely giddy about my new flash and what it had already done for me. 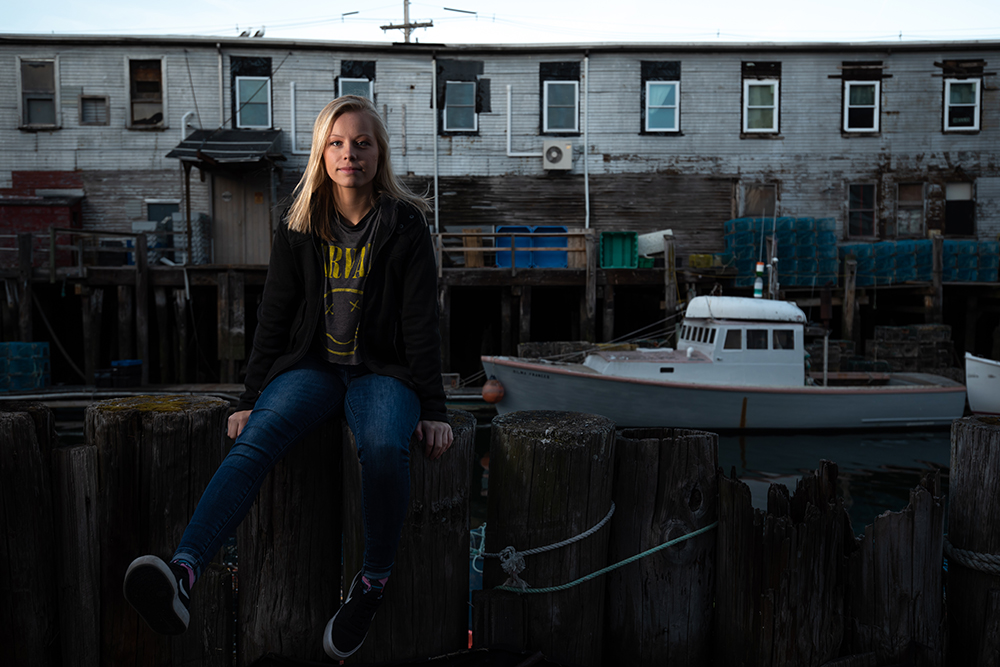 Eventually we packed up and ventured to the rooftop of a parking garage on the East End that I knew had great views of the city after having longboarded many times down this garage – much to the disapproval of the security guard, had he known about it – with my friends in our early 20s. Back when we were all a little more devious…hehe.

Up here I wasn’t as happy about what I captured for a few reasons. The fading sunlight provided a tasty background, but I had a hard time exposing my photos properly. Plus, I didn’t like that my flash was illuminating the corner behind Angie, and the wind was doing everything it could to knock my flash over (which it did successfully, once – but thankfully there were no casualties). I figured the wind would be an issue, but I hadn’t yet bought anything to weigh it down, so we went for it anyway. (I later realized I could use my 10lb ankle weights that I always have in my car for my gym visits!) I was still pretty happy with a few of the shots, but the ones by the waterfront were the ones that really tickled my fancy. 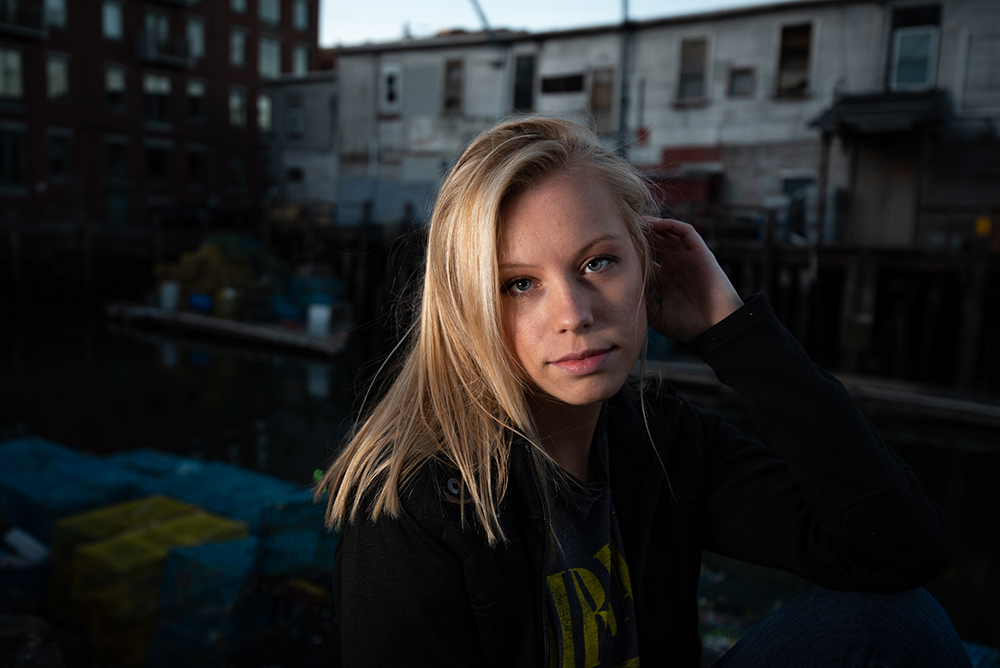 A week later, after having edited and delivered the photos to Angie, I posted a few of my favorites on social media, including one on Reddit.

Because of the nature of Reddit and how merciless people can be, I figured my photo would probably be hyper-criticized and nitpicked to no end. I was okay with that, because I generally thought the photo was strong but knew it wasn’t the Sistine Chapel of photographs. Plus, it’s to be expected on this platform.

The comments ended up being overwhelmingly positive, and most (or all) of the criticism actually wasn’t too harsh, thankfully. They were almost invariably things I agreed with, in fact. The most common criticism was that Angie was only lit on one side of her face. It’s generally best practice to light both sides, using a “key” (or main source of light) for one side and a “fill” for the other to reduce the harsh shadows and illuminate that side more. Even better, if you can achieve the “Rembrandt lighting” effect, wherein the darker “fill” side contains a triangle of light on the upper part of the cheek, that’s the real deal and the photo goes from good to great, or great to excellent. 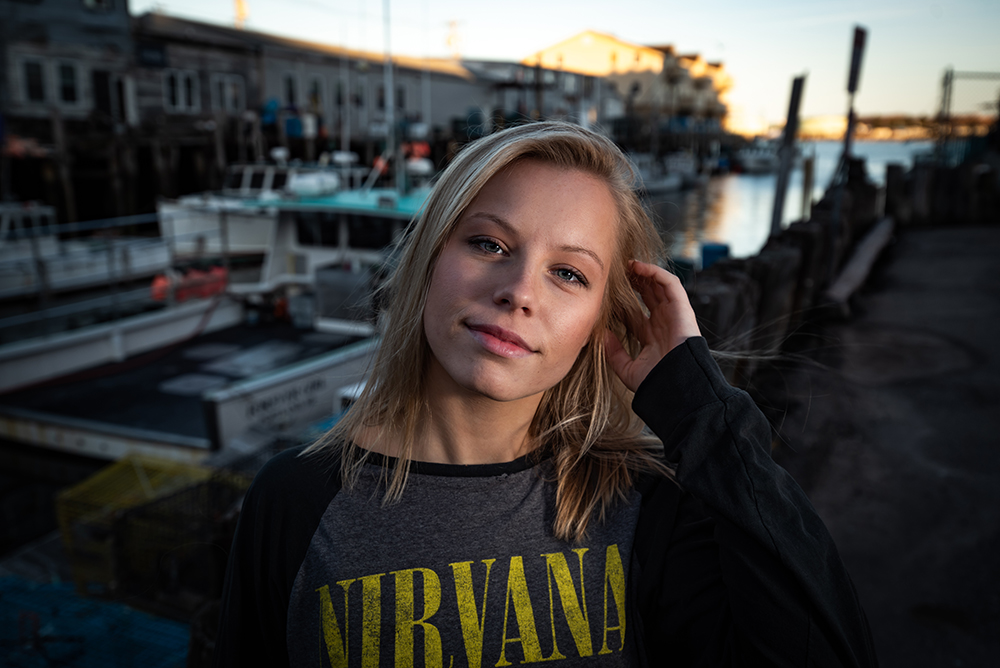 See that triangle of light on the left side (her right) of Angie’s face? That’s the “Rembrandt lighting” effect!

Ironically, the very day I posted the photo – about a week after the shoot – I had actually purchased a “light bounce” or “reflector” to act as a fill light. After looking up DIY solutions, I had gone to Lowe’s and purchased a 1″ thick piece of pyrostyrene board – at $18, ya can’t beat it. Both sides – one of the white styrofoam it’s made out of, and one with a silver film to it – can be used as light reflectors. The only thing that I still haven’t figured out is exactly how you prop it up when you’re working alone. (Hmm…maybe my guitar stand will work? I recently thought.) 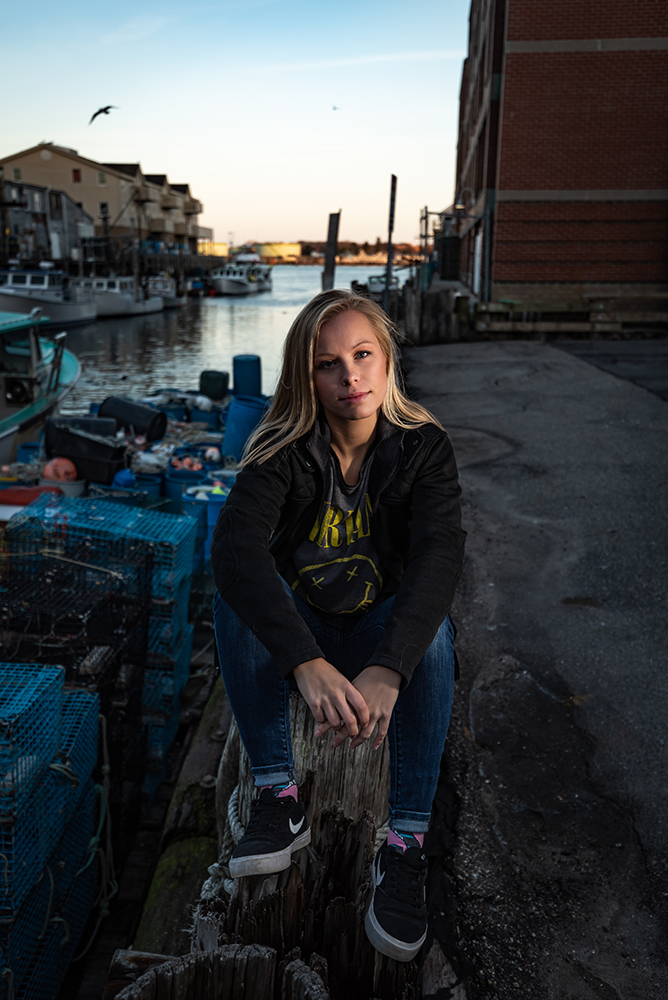 The photo I posted on social media

However, I hadn’t even thought of a bounce on the day of the shoot. I wasn’t out to create some groundbreaking photos devoid of error; I simply wanted to practice using my new flash, and if I got some sweet photos out of it, then hell yeah! And if I had thought of and even brought a bounce with me, I’m not sure where I would have put it for some of the shots – including the one I posted on Reddit – when all there was next to Angie on the shadowed side of her face was only lobster traps and water.

Nonetheless, the experience was not only fun as hell but an excellent learning experience. I now know how to use my flash (for the most part, anyway – there are a lot of buttons on it…), and once I begin incorporating the reflector for some fill light, I think my portrait photography will improve overtime. I even got to put the flash to use for two Maine Monitor photo assignments in the last month!