Back in March, I received some news that got me real giddy: I won third place in one of the categories of the 2021 Appalachian Mountain Club Photo Contest! Specifically, the Outdoor Adventure category. There were four: Lands, Waters, and Wildlife; Outdoors Close to Home; Conservation Award; and Outdoor Adventure.

The award is for my photo, “Ice Fisherman by Shawnee Peak.” I took it on my way home from a hike in the White Mountains in New Hampshire. It’s available as both a canvas and framed print!

It only took years and years of doing this to achieve the glorious taste of victory in a photo contest, but I’m tickled pink. For real.

There were hundreds of submissions and I was up against a lot of talent, so it’s legitimately an honor to have my photo selected.  I have to congratulate the other photographers who won – their work is seriously outstanding!

I actually asked the point person of this contest about how many entries there were. I was elated when I received this response: “There were 306 other entries in the Outdoor Adventure category so your win is pretty impressive! We all really loved your photo. It’s truly unique among the entries we received this year.”

I’ll tell my mom you said that. 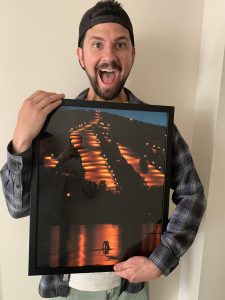 The funny – and probably ironic – part of this was that I almost didn’t take this photo. As I was driving, I looked over toward Shawnee Peak and definitely was stricken by the scene. But I already had my share of adventure that day and just wanted to be home after spending all day outdoors in wintry conditions. So I kept driving. I asked myself: Do I really wanna wanna turn around and go through the motions just to take a few more photos? This meant turning around, driving back, then turning around again so I could park on the side of Route 302, since there’s no proper parking space.

But after a few moments of deliberation, I said screw it. So I pulled over, turned around, and went through all those motions.

I parked behind a line of vehicles – presumably owned by some of the men out on the ice. When I got out, a few were hanging out near the side of the road with a sled in tow, sipping what I can only guess was beer (it definitely wasn’t kombucha or some kind of elixir, that’s for sure). Out in the distance were two other men, standing far apart from one another, and one of them was perfectly situated in the glow of the mountain lights of Shawnee Peak. After I snapped a few wide-angle landscape shots, I used my Nikon 24-120mm lens to zoom in on the ice fisherman in the glow of the lights.

And just like that, I captured something that would go on to not only resonate for so many people, but a photo that earned me my first-ever award in a photo contest.

It probably sounds like I’m tooting my own horn, but as someone who is often so hard on himself with almost impossibly high standards for his work, I suppose a lil’ tootin’ is warranted from time to time.

I truly did not expect any of the response I got from the photo. I knew I liked the photo, but I didn’t think it was anything groundbreaking or astounding. But I was definitely proud of it.

When I posted it on social media, including Instagram and Reddit, the response ended up being overwhelming. It was shared by a few accounts with a lot of followers; it generated more than 700 likes on Instagram, which for me is a lot; and it received nearly 1000 upvotes on the Maine subreddit. It was so cool to see my photo resonate for so many people, especially when I really didn’t get the big splash at all. One Gorham resident who saw my post on Reddit ended up ordering a print of the photo from me, and we chatted on the phone for quite a while, which was so rad! I seriously appreciated the response and it gave me the feeling that my work is not for nothing, which is a mental trap I sometimes fall into as someone who’s so hard on himself. 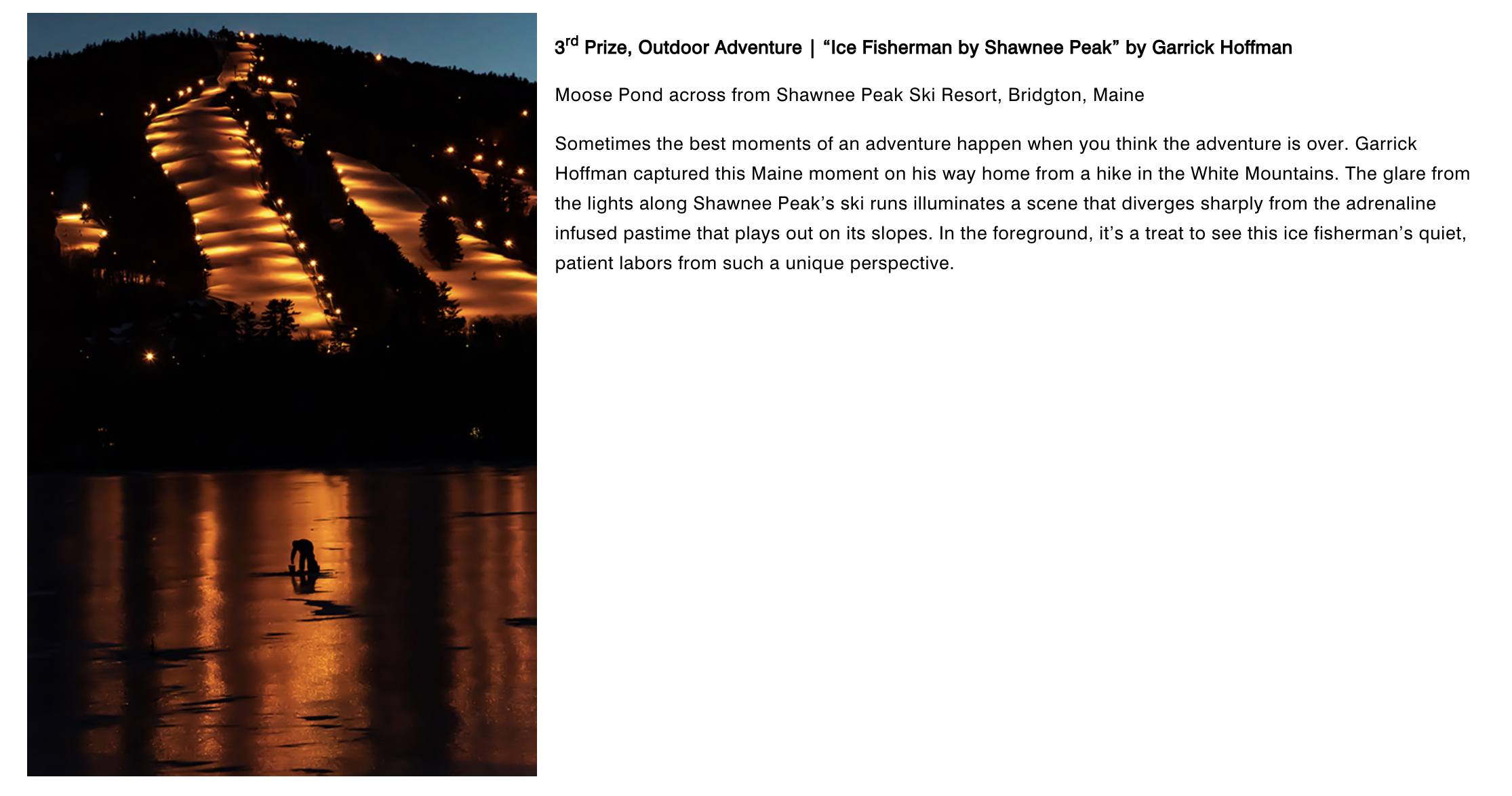 Lessons From This Accomplishment

This photo of the ice fisherman was actually a great learning experience for me, since I almost didn’t capture it. As I mentioned, I had originally driven past the scene on my way home from a hike in the White Mountains, and after some debate with myself decided to turn around to capture it. While I was certainly excited about what I had captured, I didn’t at all suspect this photo would have the effect it did. This was also the same exact story for a photo I took that Down East Magazine shared. It’s a testament to how sometimes you gotta overcome your ambivalence and just friggin’ send it.

A lot of times I debate with myself about whether to, say, go out and take photos, turn around in my car to take photos, and so on. I’m fond of telling people I have a “chronic case of ambivalence” since I’m frequently indecisive and overthink things.

But this photo is a perfect example of how oftentimes – or maybe invariably – the answer is, “Yes, turn around and take some damn photos.” Sure, this might mean you don’t get stellar images 10 out of 10 times. But if there’s a chance you do get great photos, and it comes at very little cost (say, the inconvenience of turning around, or a slight reduction of your gas tank), then just do it, as Shia LeBouf once exhorted us.

Even recently, I went out around sunset to see if I could get some photos by a couple lakes. The cloud cover was looking promising, and it was only a 15 minute drive for me.

There will be times when I do go out of my way just for photos, and I’ll come home ecstatic with what I captured. In fact, that just happened just a few days ago, when I woke up for sunrise and captured this image – also just 15 minutes from where I live.

Sure, even if you want to go out to take photos, it doesn’t mean it’ll always make sense. There have been plenty of times I want to wake up to capture a sunrise along the coast, but the weather forecast just doesn’t add up to incentivize me to go out and do it. So I choose not to go – after all, this is basically a 30-minute drive, minimum, anytime I want to go to the coast – and I end up being thankful I didn’t go. I don’t want to waste my time or gas to get what essentially will be nothing at all. So some calculation is surely involved, and sometimes you do have to say no.