Source: The Bicycle Coalition of Maine

This route will take you from the heart of Boothbay to Southport, down to Cape Newagen, past Hendrick’s Head Lighthouse, up to the Coastal Maine Botanical Gardens, and back! (There’s even an aquarium, if you so choose!) 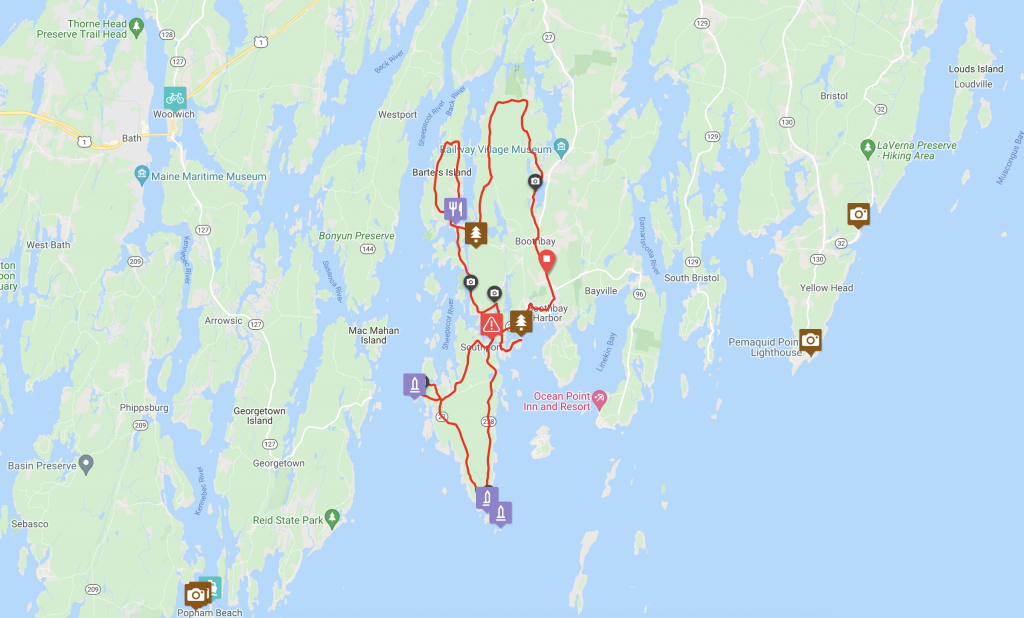 This is how the BCM describes the ride: “The village of Boothbay Harbor retains all the charm and rich heritage of maritime New England, with traditional white clapboard homes. One of Maine’s most beautiful harbors, it is equally as breathtaking when viewed from the historic footbridge at sunrise, or from the deck of a friendship sloop as it rounds Tumbler Island. The scenery is simply spectacular.
This ride begins at the Boothbay Region YMCA in Boothbay Harbor; restrooms are available during regular business hours. The 33 mile ride takes you along quiet back roads, passes the beautiful Botanical Gardens, picnic areas, lighthouses, several beaches, and includes a stop at the aquarium, where you can enjoy a beautiful view anytime of year. [Curated by Debbie Asbjorn]”

My Rating: Moderate to Difficult. Between the length and the elevation gain, this one will challenge you, but it’s SO worth it!

The Route: From the YMCA, I headed south toward the bridge leading to Southport. After crossing the bridge (make sure to walk your bike across it!), I took a left at the junction and went clockwise (it’s easier for right-hand turns), heading toward Cape Newagen. I continued all the way around, passing and leaving Hendricks Head Lighthouse for later, until I returned to the junction, then continued on the rest of the route as mapped out. I indeed stopped at Coastal Maine Botanical Gardens, where I got to see one of the giant wooden trolls (see below!) but also kinda got kicked out since I was on my bike and it’s foot traffic only…and requires payment, haha. 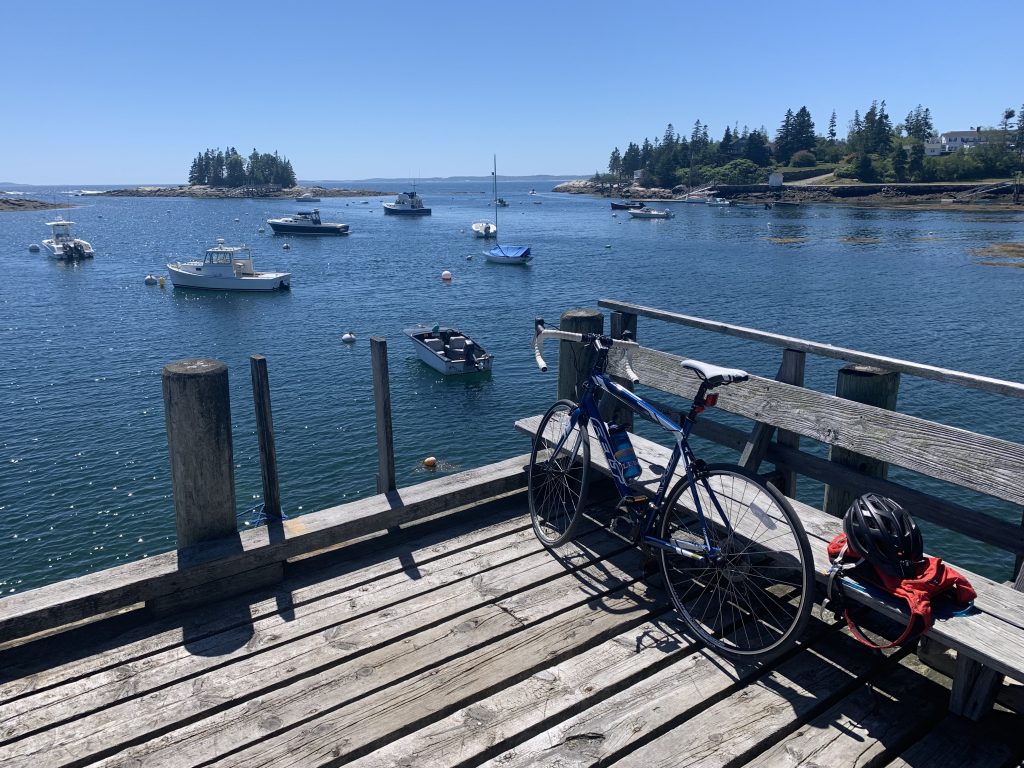 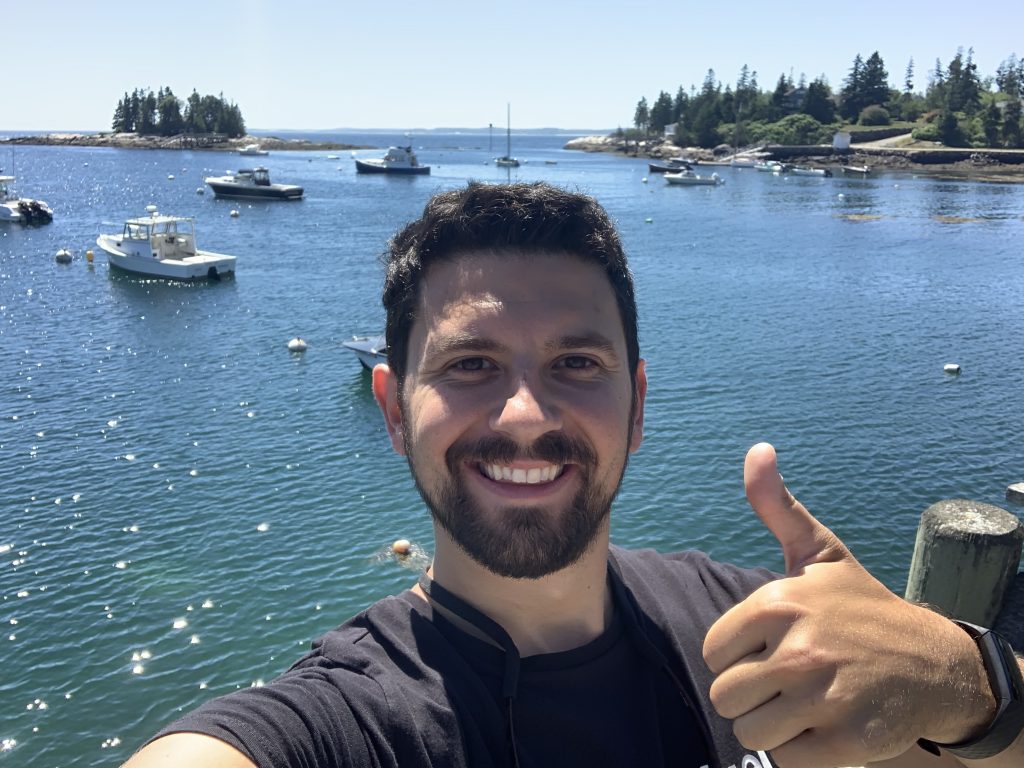 Mandatory selfie at Cape Newagen for my mom, grandma…and also my blog

This one is probably my favorite ride so far this year!

There’s just SO much to see, and it made me wish I had started a little earlier so I could stop everywhere along the route. (I didn’t hit the aquarium, a hiking trail, and other places I could have stopped at.)

The great part of this route – besides its many attractions – is its combination of ocean and countryside riding. It’s also mostly on roads that don’t have a lot of traffic, so it’s super peaceful as well as beautiful.

Not only was the route itself fun, but I ended up meeting so many people along the way. Everyone I met was SO nice, and even helpful – one couple I met at Cape Newagen actually recommended a great place to take photos at golden hour, and I ended up going through with it and being glad I did so!

Boothbay and Southport are truly enchanting parts of Maine, and it’s no wonder why it’s such a popular destination for so many tourists both within and out of the state. 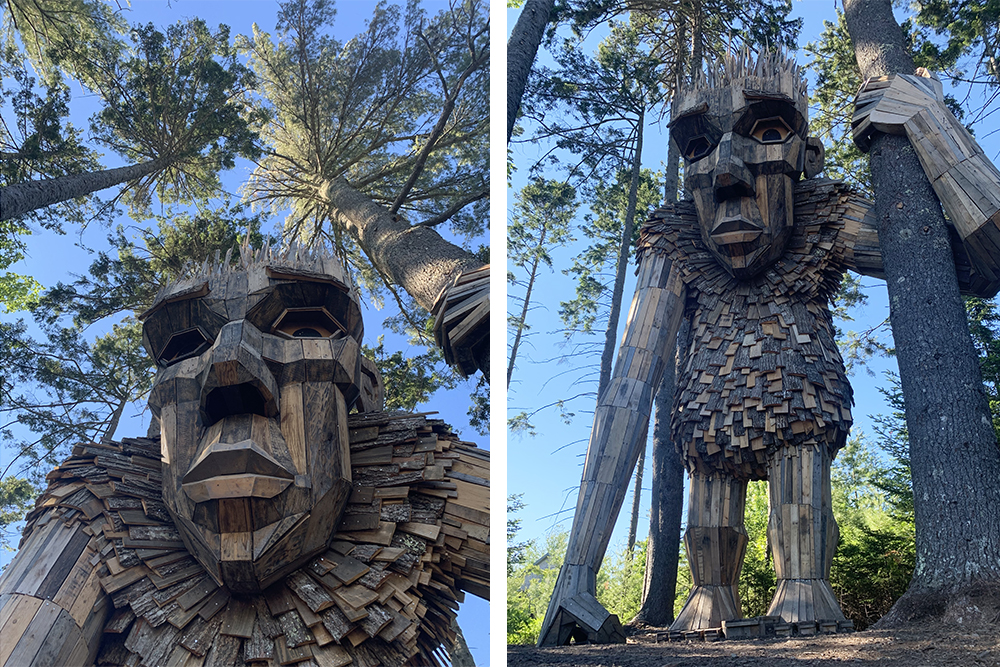 How cool is this troll at the Coastal Maine Botanical Gardens?!

I use the Under Armour Map My Ride app to track my rides. View the images below for the stats it provided me after I completed my ride. I’m not sure how the app compares to others, but I enjoy using it. 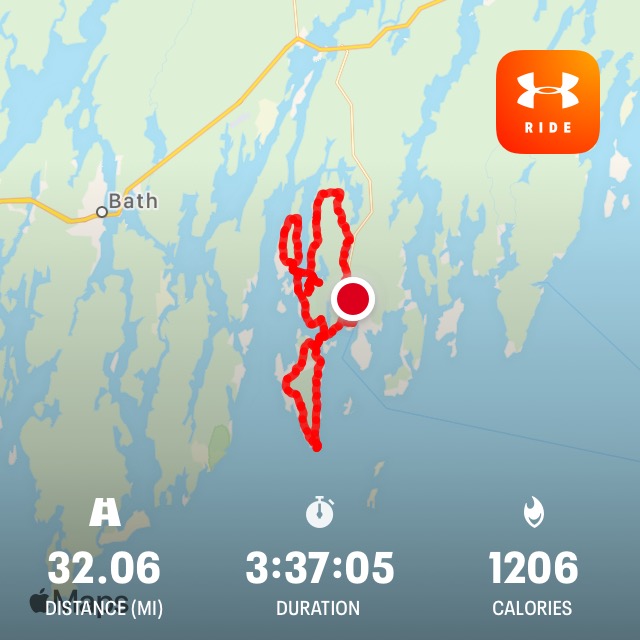 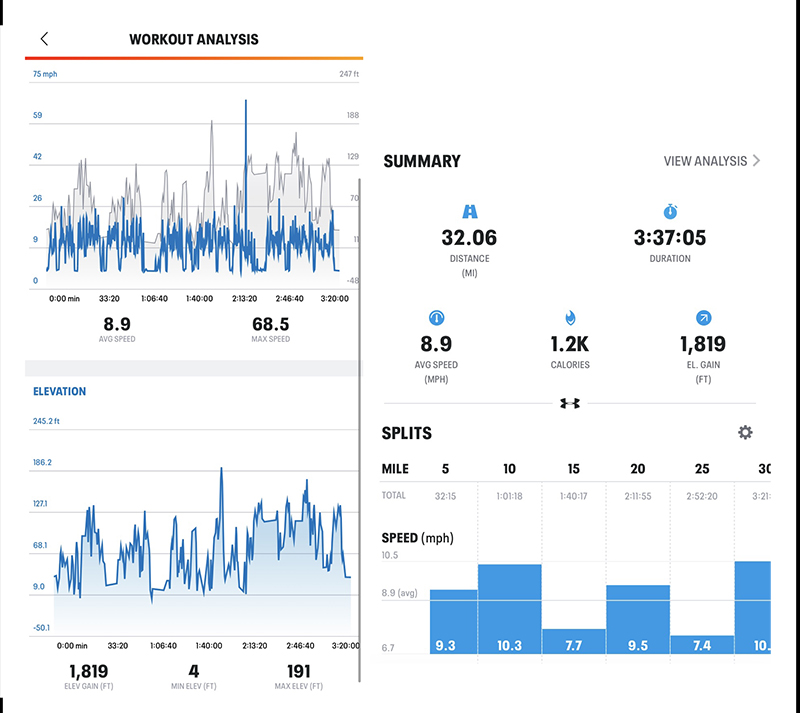 After I finally reached the terminus of my ride, I ventured out to Hendricks Head Light to do some stretching and try to capture some cool photos. After spending a few moments here, I headed back down to Cape Newagen for golden hour photos. It was here that I met a loquacious middle-aged couple who, after I told them I planned to go to downtown Boothbay for sunset photos, recommended that I instead go to Cozy Harbor just a couple miles down the road (back toward Hendrick’s) for such. 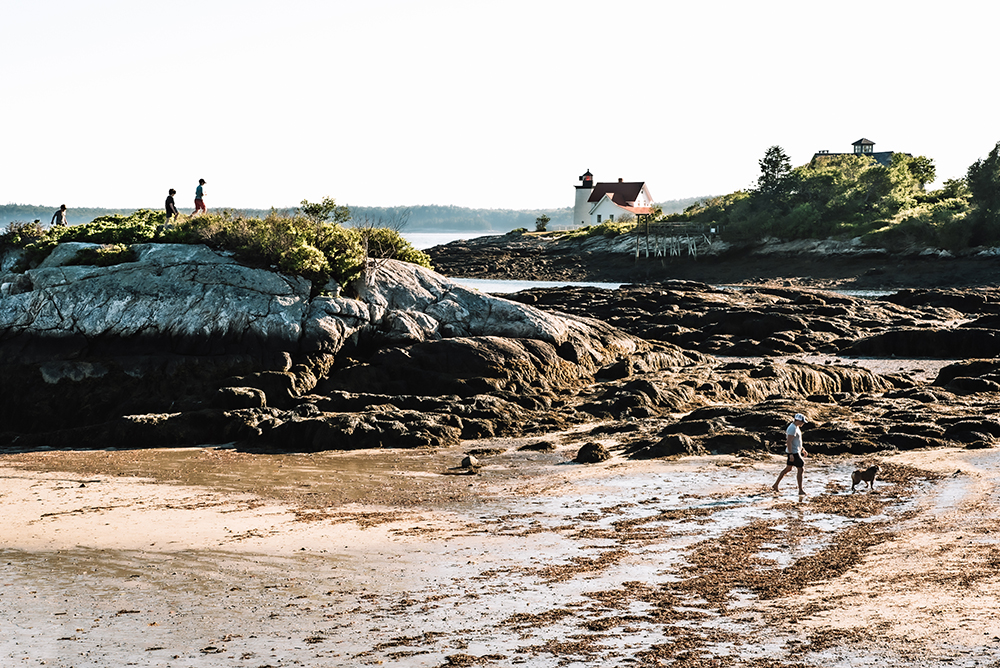 When I began driving back, I spontaneously decided to follow the couple’s suggestion and turned down the road leading to Cozy Harbor. I ended up being really happy  I did this, because when I went down to the water at Cozy’s Dockside, the sun was setting at the perfect angle from this spot. There were boats (as one might expect), ropes, and lobster traps – all quintessential Maine coast features! 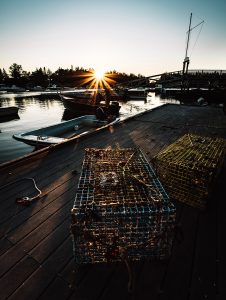 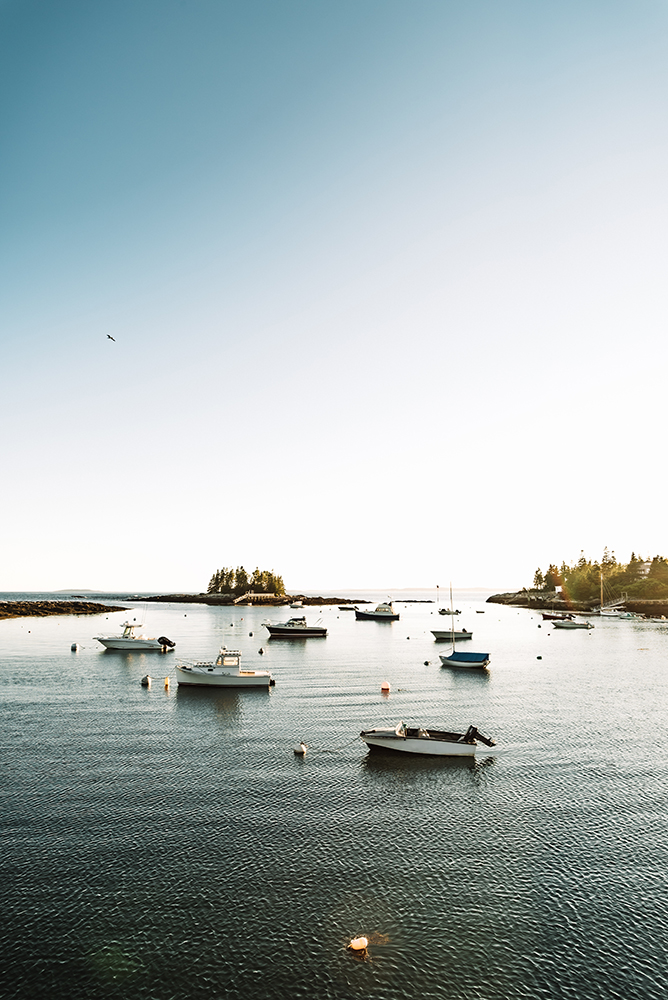 Thanks so much for reading! If you end up riding here, let me know in the comments below!